Benign Paroxysmal Positional Vertigo (BPPV) is a condition characterized by dizziness, which can also cause feelings of lightheadedness, nausea, and imbalance. This unsteadiness can disrupt your ability to engage in normal daily activities and can put your safety at risk. BPPV treatment, provided by a skilled member of the Chesapeake Ear Nose & Throat team in Baltimore, MD, can help relieve your symptoms. We aim to completely restore your comfort, independence, and quality of life. 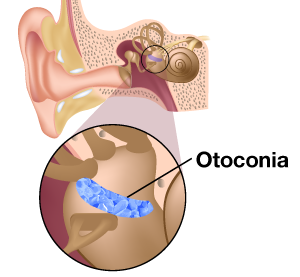 The imbalance and dizziness that occurs from BPPV is thought to be caused by otoconia. Also referred to as “ear rocks,” otoconia are small calcium carbonate crystals that collect within the inner ear. These ear rocks originate in a structure called the utricle, and they can sometimes migrate into the canal system, disrupting normal function.

In half of all recorded cases, BPPV has no known reason for occurring. However, the known causes include:

Characteristics of a BPPV Episode

The inner ear sends signals to the brain to sense head motion. If otoconia, or ear rocks, enter the canal, they can inhibit normal fluid movement and result in false signals which lead to vertigo. The primary characteristics of BPPV can be found in the name of the disorder itself. For example:

Unfortunately, there is really no pattern for knowing who will be affected by BPPV. In most cases, there is no apparent cause. Many patients simply report getting out of bed one day and becoming dizzy. BPPV is quite rare in children, but can affect adults at any age.

There are surgical and non-surgical options for treating BPPV. Typically, office treatments will be attempted first, which involve specific maneuvers intended to move ear rocks to a more desirable location. The Semont maneuver, or the liberatory maneuver, requires the patient to lay on one side and rapidly shift to the other side. Because of its brisk and harsh movements, this treatment is not widely used in the United States. The Epley maneuver, however, which is essentially a modified version of the Semont, is more commonly performed. In this case, the head is sequentially placed in four different positions. Each position is maintained for approximately 30 seconds.

Non-surgical treatments are effective at relieving the symptoms of approximately 80 percent of all BPPV cases.

After each of these treatments, your doctor will provide you with instructions for exercises to complete at home. These guidelines should prevent the ear rocks from shifting back into the sensitive portions of the canal. These non-surgical treatments are effective in approximately 80 percent of all BPPV cases. If the maneuvers do not yield acceptable results, surgical intervention may be recommended. Posterior canal plugging blocks the posterior canal’s function, relieving symptoms without affecting other parts of the ear.

If you suddenly find yourself experiencing vertigo or nausea from BPPV, there are a few things you can do at home to reduce the negative sensations. These tips include:

Learn More About Causes and Symptoms

If you think you could have BPPV, schedule a consultation with one of our doctors at Chesapeake Ear Nose & Throat. Give us a call at (410) 391-1118 or contact us online.

“I received excellent care at Chesapeake ENT. Their prompt response and cheerful attitudes made for a wonderful experience. All of the audiologists were very helpful. Especially Dr. Laura Toll, her knowledge of hearing aids and the new technology offered made for an easy decision."

"Was very knowledgeable and helpful."

"Very courteous and on time."